To those who know her well, Barbara is known as 'Mrs Wonderful'. For Liz Barton-Rossall, she is simply Mum.

﻿Whether it’s treating her to a nice meal out or doing her nails, Liz loves to spend time with her mum. Since Barbara's diagnosis of Vascular dementia in January, Liz has been adapting some of their activities so they can continue to enjoy their time together, despite the challenges that her mum’s dementia brings. 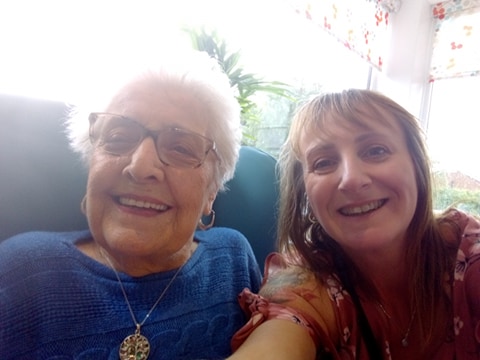 Liz’s mum is eighty-five and was diagnosed with Vascular dementia in January this year. But the family had to go on a bit of a journey to get to that diagnosis

‘Looking back there had been signs but nothing major. Then in April last year Mum ended up in hospital whilst visiting me with suspected pneumonia. After being admitted to a ward, a doctor came to see her and carried out an AMT (Abbreviated Mental Test) which Mum struggled with. I put it down to her being poorly, hungry and tired after having spent a few hours in A&E so when the doctor said to me "how long has your mum had dementia" I was taken aback and told her she didn't.’

Over the following few months, Liz’s mum had other health complications which meant more time in hospital as well as home care support to help her with her medication and preparing meals. Eventually it was recommended that her mum go in for a memory assessment.

‘Mum finally got her memory assessment in December and when the diagnosis came it was a bit of a shock at how badly she'd scored. We'd either been not paying close enough attention or Mum had been quite convincing with her behaviours.’ Liz lives a hundred miles from her mum and works full time, so only gets to visit every few weeks, she therefore tries to cram in as many fun activities as possible each visit.

‘I always take her little gifts, just silly little things to make her smile or something practical to make her life a bit easier. And Mum has always had a good appetite so I tend to plan our weekends together around food. The carers only have half an hour to do meds and make her a quick meal so her food intake isn't what it used to be. And to be honest, how appealing is a microwave meal on a tray on your own in front of a TV! Mum's appetite always comes back when we take her out for a meal and it's lovely to hear her say how much she's enjoyed it.’

Barbara has always taken pride in her appearance but going to the salon isn’t possible anymore because of her dementia. Instead, Liz now brings the salon experience to her mum.

‘Doing Mum’s nails is another activity on my visits and an opportunity for physical contact that is so important for her to feel a connection with someone. I also give her a foot spa to help maintain her foot health as she won't let the carers tend to issues like this.’

Barbara has always loved singing too, no matter where they are! Liz recalls one such occasion.

‘We were in a supermarket cafe and Mum started singing but couldn't remember all the words so i got the lyrics up on my phone. We both sang to the girl who was cleaning the tables! Then Mum told her she used to be on stage when she was younger and ended up giving the girl her autograph on the back of a till receipt!’ 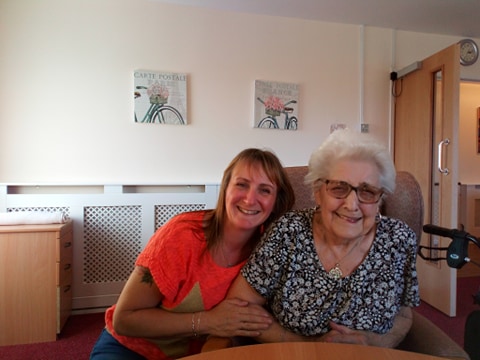 Liz has attended a Dementia Friends Session and also volunteered as a dementia befriender but fully admits that having a loved one with dementia is really difficult.

‘Not only is there the fear of how quickly will it progress or the threat of her physical health failing and all the emotions that come with the thought of losing a parent but the mental strain is something I didn't expect. The sad thing is that Mum often knows that what she's saying isn't quite right so she gets frustrated. But rather than make an issue of it, I try to distract her attention away from it to avoid any further confusion.’

‘I'm an advocate of the ‘bookcase analogy’ that is in the Dementia Friends Session. Even though I don't see Mum as often as I'd like, I hope the emotional memory of all the nice things we've done on my visits will stay with her and help remind her that she is loved and a very special person.’