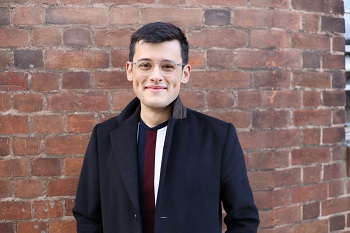 Michael Chakraverty, star of the Great British Bake Off 2019, is a committed Dementia Friends Champion. Here he tells us about his experience of supporting people with dementia and why he volunteers as a Champion.

Society is clearly not currently ready for the rising numbers of people living with the condition and I know there is a long way to go before every person, organisation and community is dementia friendly.

With one million people living with dementia by 2025, we shouldn’t be in a position where a dementia diagnosis comes with a future of isolation. It shouldn’t mean places we all take for granted, like the theatre, become no-go areas that fill people with anxiety and dread.

Working in a theatre, I see the invisible barriers that block out people with dementia – finding your seat, flashing lights, sudden darkness, crowds, the list continues endlessly. A trip to the pantomime could feel impossible – but small acts of kindness from staff and fellow theatregoers could break down these walls, and reasonable adjustments can open the arts up to those who need them the most.

There is hope on the horizon. Two years ago, I joined over 6,300 people in the UK in becoming an Alzheimer’s Society Dementia Friends Champion. I am proud to have joined Alzheimer’s Society and be part of the biggest social movement in dementia by helping to strip dementia of its negative connotations.

I work with people from all backgrounds, encouraging them to join over three million Dementia Friends by changing the way they think, act and talk about dementia – bringing vital positivity back to those blocked by invisible barriers. I’ve heard inspiring stories, shared personal experiences and felt a positive shift in each and every room. Alzheimer’s Society Dementia Friends are changing lives every day, one small step at a time.

By opening doors to those who’ve been isolated, we can help those living with the condition to reclaim their identity. While dementia is still a devastating and life-altering diagnosis for thousands of people across the UK, a diagnosis should mark a new chapter to people’s lives and not the end of the book entirely. Life doesn’t stop at the point of diagnosis and I want to do as much as I can to help tell that story. Let’s reach out to those who need us, opening doors and sharing experiences with one another.

I’m supporting Alzheimer’s Society, which is partnering with Good Morning Britain’s ‘1 Million Minutes’ campaign, to encourage everyone to pledge their support by becoming a Dementia Friend or Dementia Friends Champion.