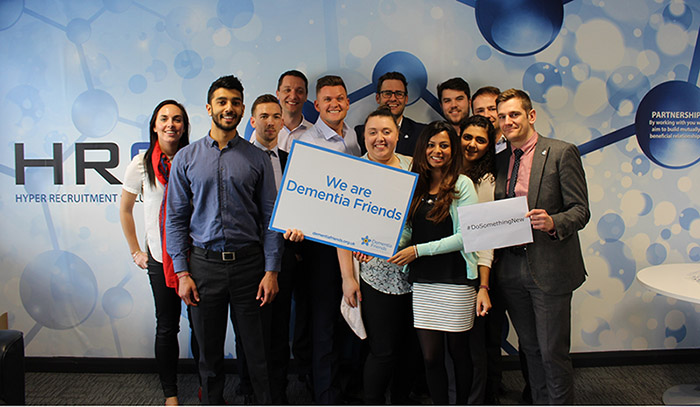 The winner of the 2012 series of the popular BBC reality TV series and his team of scientific consultants at Loughton-based Hyper Recruitment Solutions (HRS) – which was set up with investment from Lord Alan Sugar – took part in Dementia Friends Sessions throughout Dementia Awareness Week (Sunday 17th – Saturday 23rd May).

Ricky Martin, who is Managing Director of HRS, said:

‘Dementia is an issue that is very close to my heart and I truly believe it is vital that we do everything we can to get people talking about a condition that affects so many people across the UK. That’s why I wanted to support Alzheimer’s Society and do something new this Dementia Awareness Week.

‘Taking part in the Dementia Friends Session along with my team at Hyper Recruitment Solutions was a really eye opening experience and gave me a better insight of what it might be like for someone living with dementia. I would really encourage anyone and everyone to look into becoming a Dementia Friend too.’

Tina Kierman, Alzheimer’s Society Operations Manager for Essex, said:
‘Less than half of us think we know enough about dementia. Dementia Friends isn’t about creating experts, it’s about helping people understand a little bit more about what it’s like to live with the condition and then turn that understanding into action - anyone of any age can be a Dementia Friend.’

If you are interested in becoming a Dementia Friend then type in your postcode and search for a Session near to you or find out more about what a volunteer Dementia Friends Champion does.