“I started in my post October 2020, was able to have a meeting with Brenda who is the Lead for Portishead Dementia Friendly Community (PDFC), just before the lockdown started in November. She shared with me that numbers of proactive members of PDFC had declined, and we started to put together plan to build up the members!”

How did Anne, Brenda and PDFC achieve this? Through making local connections and sharing ideas! Brenda had one day bumped into Isobel, the CEO of Alive Charity, based in Bristol. The two started chatting about how Portishead could increase its effectiveness, and shared ideas, discussing possible initiatives such as a communal sensory garden.

Anne says: “Unbeknown to Brenda, I had also approached Isobel, well aware that she lives in Portishead, asking her if she would like to become involved in Portishead Dementia Friendly Community!”

Anne, Brenda and Isobel joined forces to plan a relaunch, each bringing their own skills and connections, and the enthusiasm needed to refresh the Community.

“We planned a zoom meeting, and those that attended were passionate about their areas of work and raring to take ownership to help resurrect and relaunch the Dementia Friendly Community. In November there was 2 members and by January there 7!

We talked about what we could achieve, made plans and scheduled more meetings. Between January and March links were made with the local town council, who are now on the steering group. Plans were drawn up and agreed for Dementia Action Week, where the official relaunch of Portishead Dementia Friendly Community will take place.

Three days of events are happening, Friday, Saturday & Sunday. There will be a book stall, plant stall, cakes & refreshments, and information sharing. All the members, new additions and those who were already involved, have a renewed enthusiasm, are keeping in contact, and we also have a person living with a dementia actively involved at all stages, something which is important to all of us to ensure we have the valuable input of someone directly affected by dementia.” 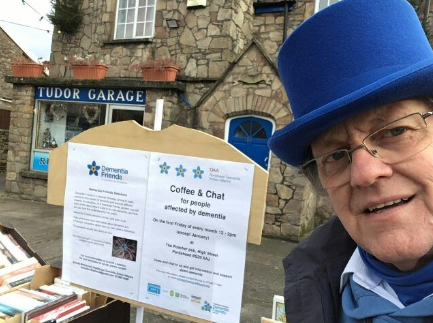 During Dementia Action Week Brenda & Anne will be interviewed by North Somerset Council to increase awareness of communities being dementia friendly, and what the local communities are doing. Plus, they have a bag full of beautiful, knitted forget-me-nots to use, which were produced by people of Portishead through PDFC in the past – they are always a hit!

It’s wonderful to hear what passionate people can do when they join forces with a shared enthusiasm and diverse skillset.

Thank you to Anne and all involved for sharing this inspiring story.